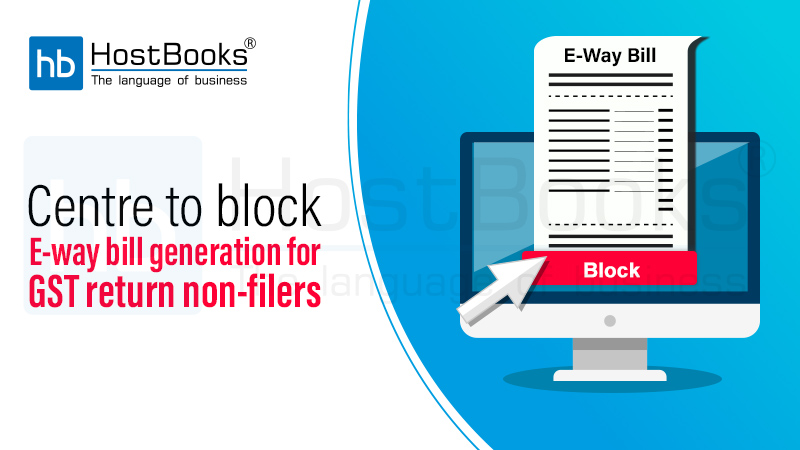 In an attempt to curtail tax leakage and concerned with the continuous decline in monthly revenue of Goods and Services Tax (GST), the government and indirect tax department are planning to impose stricter measures against non-compliant taxpayers. The tax department is considering to block the facility of e-way bill generation from 17th November 2019 onwards for taxpayers who have not filed two consecutive GSTR-3B returns.

After the filing of one of the pending returns, the ability to generate e-way bills will be restored automatically for taxpayers. GSTR-3B is a monthly return filed by every registered GST payer which provides the summary of outward and inward supplies. According to sources, the required connectivity between GST Network (GSTN) and the e-way bill system has been set up. Further, an application with the ability to block and unblock e-way bill generation has been developed and tested between two systems.

Although the GST Council had taken a decision to this effect back in April, the reason behind the extreme step could be to curb leakage of taxes. The tax department thinks that the non-filing of returns is one of the major causes of declining GST collections. To avoid disruption in their day-to-day activities, businesses have to ensure timely filing of GSTR-3B.

According to the indirect tax department, 21.99 Lakh taxpayers have not filed GSTR-3B of August and September 2019, as of 8th November 2019. From 17th November onwards, these defaulters face the possibility of getting their e-way bill generation facility blocked. To inform such taxpayers, the department is planning to display alert messages to them when they visit the e-way bill portal and encourage the filing of returns by 17th November.

The problem, however, is that the integration testing of backend applications with the GST System has not been completed yet in a few states. Unless the facility to restore e-way bill generation is developed, the department cannot proceed further with blocking it in the first place. With five months remaining in the current financial year, this might be the final effort by the government to revive GST collections.