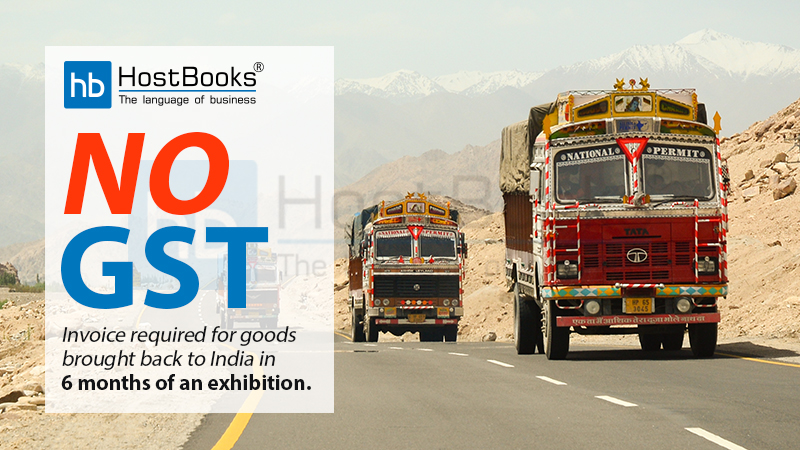 Exporters who transport goods abroad on a consignment basis for exhibitions or other promotional events won’t have to generate tax invoice if it is brought back within six months. This is especially good news for suppliers of various sectors including gems and jewelry industry. The suppliers of these items often face issues to follow the procedure under GST when taking goods out of India and at the time of consequent return to India.

On Monday, the Finance Ministry issued extensive clarification taking these problems into consideration. The ministry took notice of the problems faced by exporters due to the lack of clarity on the procedure to follow under GST at the time of taking goods out of India and at the time of their subsequent sale or return to India. It further said that the activity of taking goods out of India for an exhibition would not in itself constitute a supply under GST since there is no consideration received at this time.

However, the circular noted that the movement of these goods should be accompanied by a ‘delivery challan’. The Finance Ministry also added, “Since taking such goods out of India is not a supply, it necessarily follows that it is also not a zero-rated supply. Therefore, execution of a bond or LUT, as required under section 16 of the IGST Act, is not required.” The clarification further said that the goods taken out of India in this manner should be either sold or brought back within six months from the date of removal.

If the goods are neither sold abroad nor brought back within the period of six months, the supply would be deemed to have taken place. “In this case, the sender shall issue a tax invoice on the date of expiry of six months from the date of removal, in respect of the quantity of goods which have neither been sold nor brought back,” the ministry added. In this case, the benefit of zero-rating, including refund, will not be available in respect of such supplies.

On the other hand, if the specified goods are sold abroad, either fully or partially, within the period of six months, the supply will be held to have been affected, in respect of the quantity so sold, on the date of such sale. In this particular case, the sender will have to issue a tax invoice in respect of such quantity of goods which has been sold. These supplies will be considered zero-rated supplies at the time of issuance of invoice. However, a refund in relation to such supplies will be available only as a refund of unutilized Input Tax Credit (ITC) and not as a refund of IGST.

Lastly, the clarification states that no tax invoice is required to be issued in respect of goods which are brought back to India within the period of six months.