Hurry up if you are planning to buy a midsize car or a luxury sedan. The Goods and Services Tax (GST) Council has decided to raise the cess on high-end automobiles. Several car models that have become cheaper after the introduction of GST are set to return to their pre-GST levels or become more expensive.

These include Honda City, Maruti Suzuki Ciaz and Toyota Corolla, as well as luxury vehicles. 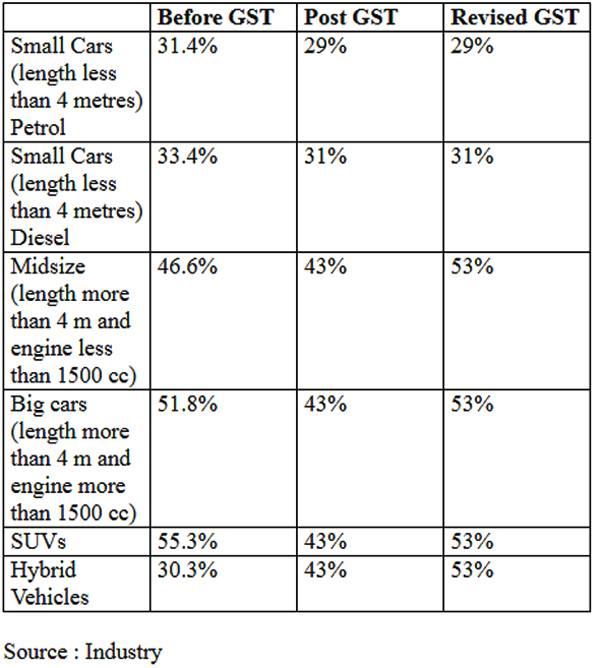 However, the rates may not go up immediately as any increase in the cess will require an amendment to the GST compensation law.

Vehicles such as Honda City likely to see price hikes of by up to Rs 80,000

Bigger cars (more than 4 m in length and with engine more than 1500 cc) will see increase of 1.2% under the revised GST rates as compared to pre-GST rates

Luxury vehicles, which had seen a rationalisation of prices by up to Rs 10 lakh post GST, will see prices going up and in some cases even increase more than what was in the pre-GST era

As per industry estimates prices of Mercedes Benz C-Class is likely to rise by Rs 3 lakh and E-Class by Rs 4 lakh, Audi Q7 by Rs 7 lakh, Audi A6 by Rs 6 lakh, Toyota Fortuner by over Rs 2 lakh,

Prices of hybrid vehicles are set to go up further with effective tax rising to 53% compared with 30% seen in pre-GST era.