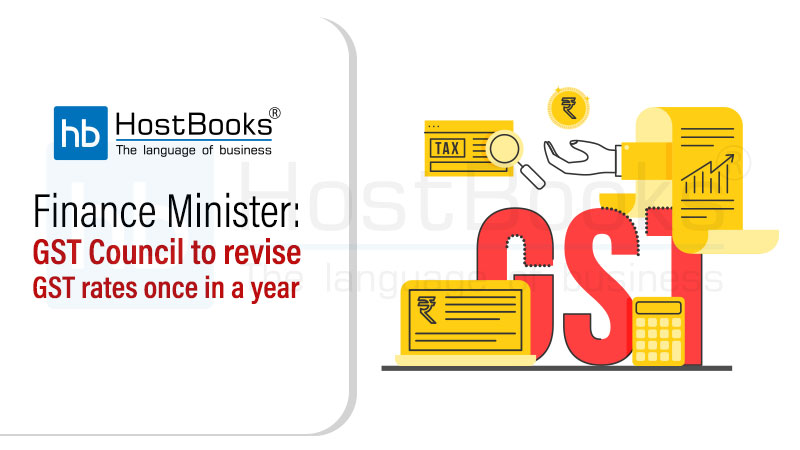 The Finance Minister Nirmala Sitharaman on Sunday said that the Goods and Services Tax (GST) Council is set to revise tax rates of goods and services once a year instead of every three months as was the trend so far. She added that such yearly revisions will remove ‘uncertainty’ both for the businesses and the government.

According to the finance minister, the frequent changes in GST rates have led to an inverted duty structure, wherein the raw materials end up become costlier than the finished product. In some cases, this also creates problems when it comes to tax refunds. While interacting with reporters at a post-budget session in Kolkata Sitharaman said, “Therefore, when the rate of tax of one item is bought down, a whole lot of other ripple effects are created. With that ripple effect, the refund is affected.”

Due to this, businesses claimed that they were unable to plan ahead of how much to keep aside for taxation in a year. The minister added that similarly, both central and states governments are not able to make an assessment of how much GST collection they will make in the whole year. She said, “Rate revision every three months brings in uncertainty… We have also discussed it in the GST Council. We have proposed to the GST Council – can we consider a situation, where once in a year alone, we would do any rate rationalization, reduction or increase, and not every three months.”

This is the first time that the Centre has shared the plan to reduce the frequency of GST rate cuts. Since the implementation of GST on July 1, 2017, there have been multiple rounds of rate cuts, which also impacted the GST revenue mop-up. Sitharaman also urged the industry to present their concerns related to rate revisions to the states who can then take it up at the Council meetings.