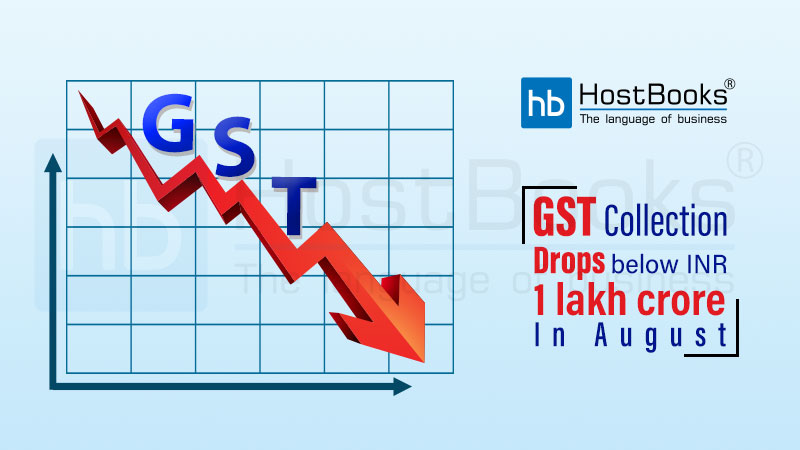 Amid an economic slowdown, the Goods and Services Tax (GST) collection in August 2019 stood at ₹ 98,202 crore from over ₹ 1.02 lakh crore in the previous month. However, the total GST collection for August this year is 4.5 percent higher than the ₹ 93,960 crores collected in the same month last year.

During this year, this is the second time that the revenue collection from the GST has slipped below the ₹ 1 lakh crore mark. It happened for the first time in June when the collection was ₹ 99,939 crore. To meet the budgeted target for the current financial year, the government needs the average monthly collection of over ₹ 1 lakh crore.

According to the statement released by the Finance Ministry, the Central GST (CGST) collection was ₹ 17,733 crores, State GST (SGST) ₹ 24,239 crores, Integrated GST (IGST) ₹ 48,958 crores (including ₹ 841 crores collected on imports), and Cess was ₹ 7,273 crore (including ₹ 841 crores collected on imports) during August this year.

The statement further stated that the total of 75.80 lakh GSTR-3B returns were filed for the month of July up to 31st August 2019. The latest GST collection numbers are in line with the economic slowdown. On Friday, it was reported that the GDP growth fell to over six-year low of 5% during the April-June quarter of 2019.

While addressing a press conference in Chennai on Sunday, Finance Minister Nirmala Sitharaman said that the government has been in consultation with various sectors for solutions to revive the slowing economy. She said, “In some sectors, the inventory is piling up… different issues for different sectors and having heard that and having spent some time to see how best we can respond, the first tranche of the announcement were made on August 23.”