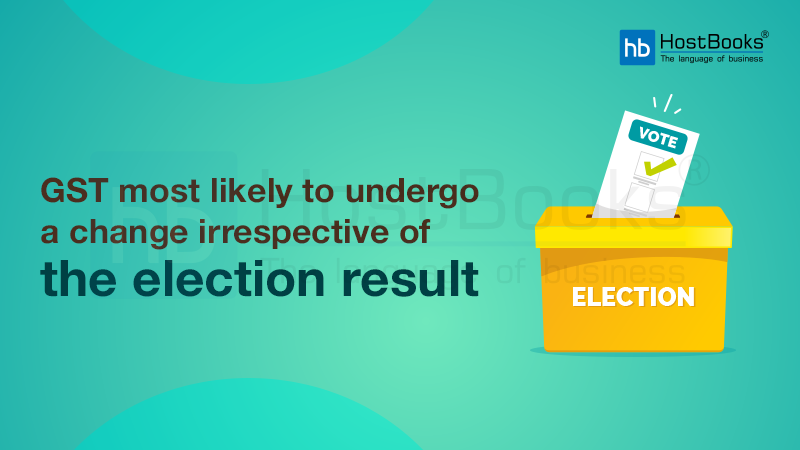 The controversial Goods and Services Tax (GST) is all set for a refit regardless of who comes to power in the forthcoming elections. Top finance ministry officials said that more of goods currently in the 28 percent luxury bracket would be brought down to lower tax slabs. The GST median rate now at 18 percent could eventually be reduced.

“There will be a continuation of GST reforms regardless of who forms the government. The aim is to slowly reduce rates and slabs,” said an official. While the Congress manifesto has promised to tweak the current four-rate tax structure into a two-rate one, the BJP manifesto has remained delightfully vague but promised continued simplification of GST.

Officials said they are working towards a three-slab regime, with a far leaner list of goods taxed at the top-end of 28 percent.

“Some feel the two slabs of 18 percent and 12 percent could be merged into one rate and that finally, there could be three rates: one standard rate for most of the goods, one higher rate for demerit and luxury goods and one lower rate for the goods for consumption of the poor,” said Sumit Dutt Majumder, former chairman, Central Board of Excise and Customs.

GST subsumed numerous Central and state taxes and levies from July 1, 2017. However, the introduction saw multiple rates, heavy-handed bureaucratic rules, and poorly designed Internet architecture to support the tax measure, causing chaos and uncertainty among small businesses. Consequently, since its launch, the GST has undergone several rounds of major changes.

“While at the beginning of GST, there were too many items (more than 270) in the highest slab of 28 percent, later, in 34 meetings of GST Council, that list has been pruned to just 28 items. Similar pruning has been done for the other slabs of 12 and 18 percent. So, it can be said that already in the course of one year, GST has resulted in an overall lowering of the indirect tax rates,” Majumder said.

The Congress manifesto’s more drastic recommendation is to not only have one median rate and luxury rate but to do away with the lower discounted GST rate of 5 percent.

“The Congress manifesto indicates that goods taxed at the lower rate could be zero-rated in relief to consumers,” Majumder pointed out.

Finance ministry officials, however, said that moving all goods in the 5 percent rate to zero altogether could be problematic, especially as it might result in loss of revenues for states.

GST Jargon of the day

UIN or Unique Identity Number is an ID that is used to identify specialized agencies who are non-taxable on Indian soil. These agencies can be bodies of the United Nations, consulates, foreign embassies or organizations that are exempted either by the UN or by our government(s).