Know All About ITR: Last Date, Penalties & Other Details 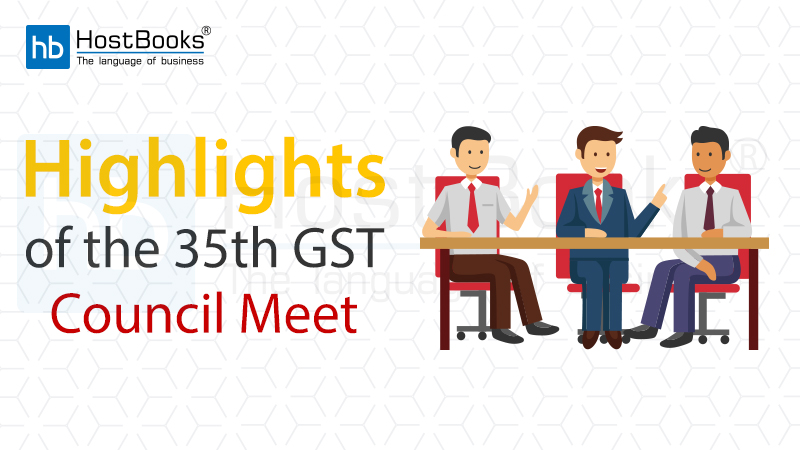 After swearing in of the Modi led new Government, the 35th GST Council Meeting was the first meeting of the Council that took place under the chairmanship of the new Finance Minister Nirmala Sitharaman on 21st June 2019 (Friday) in New Delhi.

The Council began with passing a resolution acknowledging the crucial role played by the former Chairperson of GST Council Shri Arun Jaitley and expressed its gratitude for the extraordinary contribution made by him in making the GST Council a shining example of co-operative federalism that it has become today. The Council also thanked the outgoing Members and welcomed the new Members of the Council. It also expressed its deepest condolences at the untimely demise of Shri Prakash Pant, the former Finance Minister of Uttarakhand.

The key highlights of this meeting

1) The Council has also recommended following GST rate related changes on the supply of goods and services.

In accordance with the order of the Hon’ble High Court of Delhi, the GST Council directed that issues related to the valuation of Goods and Services in a solar power generating system and the wind turbine are ready to be placed before the Fitment Committee. And, the recommendations of the Fitment Committee would be placed before the next GST Council meeting.

A Group of Ministers (GoM) on Lottery has submitted a report before the Council. After deliberations on the various issues on the rate of the lottery, the Council recommended that certain issues related to taxation (rates and destination principle) require the legal opinion of the Learned Attorney General.

2) In order to provide enough opportunity to taxpayers as well as the system to adapt the new return system shall be introduced in a phased manner. The details of this new return forms are described as below –

4) To provide sufficient time to the trade and industry to furnish the declaration in FORM GST ITC-04, relating to job work, the due date for furnishing the said form for the period July 2017 to June 2019 to be extended till 31st August 2019.

5) Certain amendments to be carried out in the GST laws to implement the decisions of the GST Council taken in earlier meetings.

6) Rule 138E of the CGST rules, pertaining to blocking of e-way bills on non-filing of returns for two consecutive tax periods, to be brought into effect from 21st August 2019, instead of the earlier notified date of 21st June 2019.

Apart from the above significant points, some additional points were also discussed which are as follows –

The 35th GST Council meet has brought a great sigh of relief to thousands of taxpayers by making the filing process easier through introducing the new return forms. Moreover, as per the recommendation placed by the council before the Fitment Committee would bring a bouquet of good news in the next GST Council meeting.