What to do if your e-way bill generation facility is blocked? 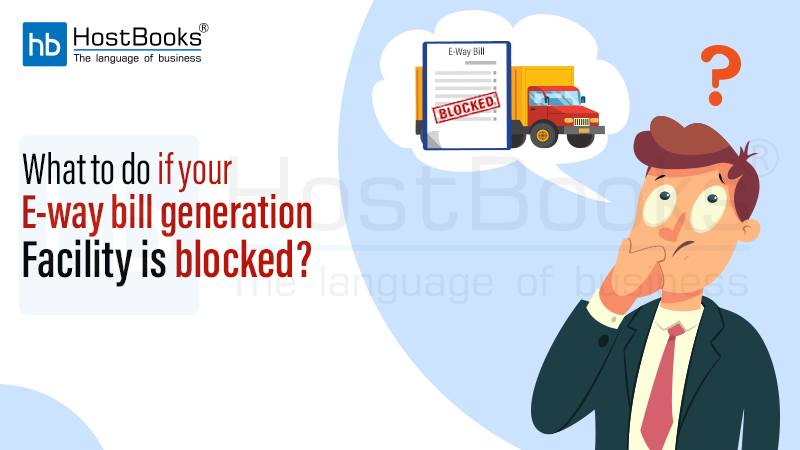 To curb tax evasion and non-filing of GST returns, the government has implemented the blocking of the e-way bill generation facility, with effect from December 2, 2019. Taxpayers who have not filed their returns for the previous two or more consecutive tax periods are barred from generating the e-way bill.

What is the reason for the blocking of e-way bill generation?

According to the GSTN data, there are around 20.75 Lakh GSTINs that have not filed GSTR-3B for the month of September and October. Additionally, out of these total 20.75 Lakh GSTINs, about 3.47 Lakh GSTINs had transactions for September and October 2019 in the e-way bill portal. The tax authorities are of the view that the non-filing of returns is a primary reason for the declining GST revenue collection. Hence, the ability to generate e-way bills had to be blocked for taxpayers who have not filed their Form GSTR-3B return for two consecutive months.

How will the blocking of e-way bill generation work?

GSTR-3B is a return form which contains the summary of details of outward & inward supplies and the final tax payable after claiming the input tax credit. It should be filed by every GST-registered taxpayer on a monthly basis.

As per the new rule of blocking of the e-way bill generation facility, a taxpayer failing to file GSTR-3B return on the GST portal for two or more consecutive months will be blocked from generating an e-way bill. A blocked GSTIN cannot be used to generate an e-way bill whether as a supplier, recipient or transporter. For instance, if a taxpayer has not filed GSTR-3B for September and October 2019, his/her e-way bill generation facility would be blocked from 2nd December 2019.

In case of blocked GSTINs, for e-way bills that are generated already, facilities such as updating the vehicle and transporter details or extending the validity of these e-way bills will not be impacted.

How to get your e-way bill generation facility unblocked?

For immediate updation of the status, the taxpayer can visit the e-way bill portal and select the option ‘Search Update Block Status’, enter the GSTIN and then click on ‘GO’. If the status reflects as ‘blocked’, click on the option ‘Update Unblock Status from GST Common Portal’. This will fetch the most-recent filing status from the GST portal and, if the pending returns are filed, the e-way bill status will get subsequently updated as ‘unblocked’.