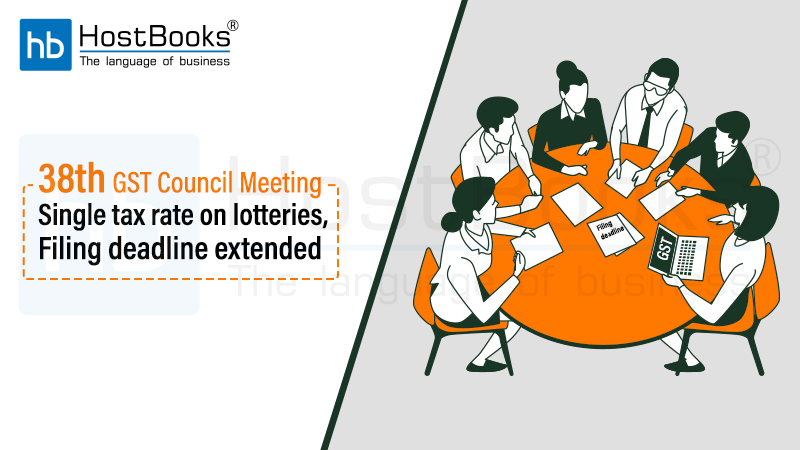 The Goods and Services Tax (GST) Council, in its 38th meeting chaired by the Union Finance Minister Nirmala Sitharaman, decided to have a single tax rate on state-run and state-authorized lotteries and extend the deadline for filing of GSTR-9 and GSTR-9C returns. The last date for filing of GSTR-9 (Annual Return) and GSTR-9C (Reconciliation Statement) for FY2017-18 has been extended to 31st January 2020, from 31st December 2019.

The Council for the first time, since it was constituted, arrived at a decision on a single tax rate of 28% on both state-run and private lotteries through voting. Commenting on the matter, Nirmala Sitharaman said, “Every attempt was made to keep that set tradition alive… to convince based on opinion-making in the house but eventually the Council was reminded what the rules allow, and that tradition was not part of the rulebook. And the rules are what should govern the Council.”

Among other decisions, the GST Council also decided to exempt long term lease on industrial plots to facilitate the setting up of industrial parks which will become applicable from 1 January 2020. Revenue Secretary Ajay Bhushan Pandey briefed reporters after the meeting saying the government has decided to waive the late fee for taxpayers who have not filed their returns from July 2017 to November 2019 if all the returns are filed by 10 January 2020.

An official release said that the GST Council decided to exempt the upfront amount payable for the long-term lease of industrial/financial plots by an entity having 20% or more ownership of central or state government. The release further added, “The Council also considered the rate of GST rate on woven and non-woven bags and sacks of polyethylene or polypropylene strips or the like, whether or not laminated, of a kind used for the packing of goods in view of the requests received. It recommended raising the GST to a uniform rate of 18% on all such bags including Flexible Intermediate Bulk Containers (FBIC).”