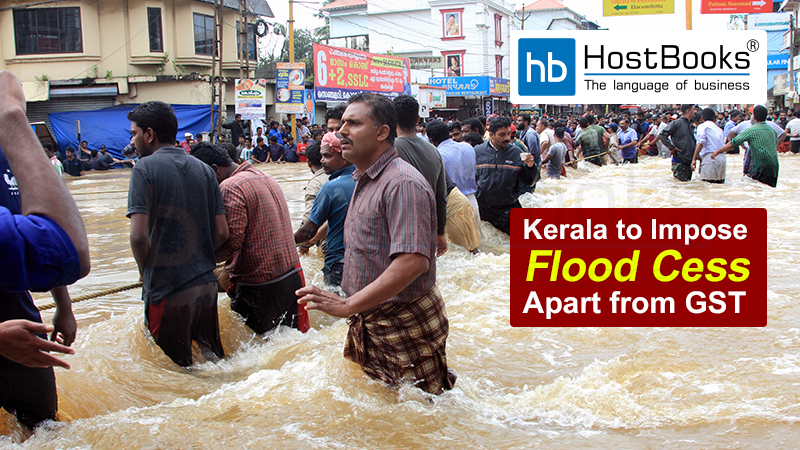 The Kerala government is all set to levy 1 percent flood cess on the value of supply of goods or services or both. The proceeds from this will be raised to fund the re-construction of projects impacted by devastating flood occurred in the state in August 2018. The GST Council on its 32nd meeting has given a go-ahead for the levy of Kerala Flood Cess. It will be applicable from 1st August 2019 for the next two years.

The flood cess will be applied on items which fall under the GST slab of 12% and above. The funds collected from this cess would be used to finance construction activities for roads and structures directly affected by the flood. Items which fall under 5% GST tax slab are exempted from the flood cess. For instance, hotel food, air-conditioned train, and bus ticket booking have been excluded from the levy of this cess. Additionally, taxpayers who have opted composition scheme are also exempted from the levy of Kerala Flood Cess.

The Kerala Flood Cess will not be applicable for interstate supply and only be levied for inter-state supply. The cess can directly be collected from the customers by showing it separately in the invoices. The issued invoice should disclose the details of flood cess including the rate of tax and amount of tax charged in respect of goods or services. If a transaction is being done between registered taxpayers in furtherance of business then it will be exempted from the levy of this flood cess.

Finally, the due date for filing GSTR-3B for a month which is to be remitted on or before 20th of the succeeding month will also be applicable for the Kerala Flood Cess return. Some of the details to be furnished in the return include the return period and the details of turnover of outward supply leviable under the flood cess based on GST tax rules. In the case of a delayed payment of Kerala Flood Cess, an interest rate of 18% will be applicable.