AAR classifies polypropylene mats under Chapter 46 is taxable at 5%

No Consensus on ‘Why Consumer Goods Demand Increased After GST?’ 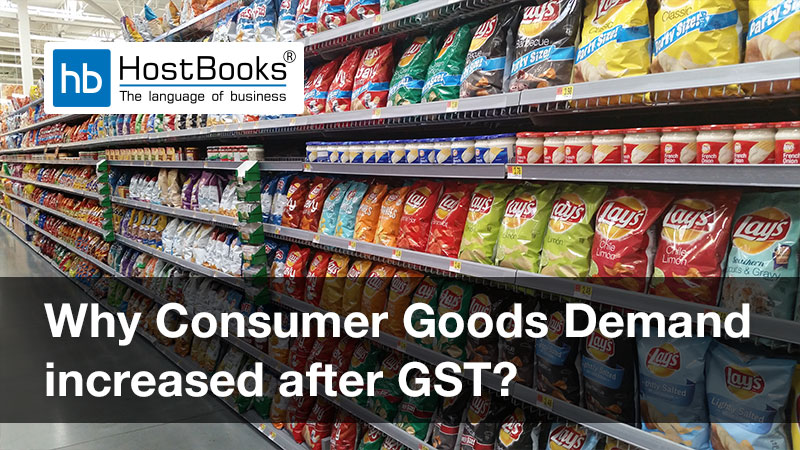 As the supply-chain emerged from the initial commotion caused by Goods and Services Tax, the number of consumer goods makers increased surprisingly. There is no consensus on ‘why did it happen so?’ Manufacturers of soaps to biscuits admit that the lower GST rates drove higher demand. But, distributors and retailers aren’t sure if that was the trigger and attribute it largely to a quick recovery after the twin disruptions of demonetization and GST.

When distributors pared inventory ahead of the July 2017 rollout of GST, fearing losses on the leftover stock, the wholesale demand decreased badly. The first three months ended in September 2017, sales volumes of consumer goods makers grew for six straight quarters. In November 2017, the apex decision-making body in the GST regime, The GST Council, slashed the number of fast-moving goods attracting the highest 28% tax rate from 224 to 50.

That brought a host of daily-use products including shampoos, soaps and detergents, and deodorants and perfumes in the 18% tax bracket. The companies were supposed to pass on the benefits to consumers by lowering prices but not by offering more weight in the same pack.

According to Dabur India Ltd. CEO, Mr. Sunil Duggal “If prices get down, people tend to consume more and we have seen a consumption trend in the last one or two years after GST implementation.” Further, Mr. Duggal acknowledged that the consumption has been fairly booming after the instability brought by demonetization and in the run-up to GST.

While on the other side, in the words of the category head at Parle Products Pvt Ltd., Mr. Mayank Shah “lower taxes increased the demand for its products by an additional 4% to 5%. Customers have largely been loyal to existing products such as Namkeen and Toast/Rusks.

Distributors Don’t See Such a Trend

On the other hand, according to distributors and retailers “lower prices didn’t create additional demand”. While, as per the notions of four distributors and three retailers “the volumes jumped more on a lower base as the demand had slowed first because of demonetization and then GST”.

A retailer from Maharashtra admitted that “the consumption has increased organically, but not because of rate cuts”. A distributor in Mumbai told that “2018 was a year of growth, which can’t be attributed to rate cuts”, while as per his South Indian counterpart “the demand was growing at its historic pace”.

A distributor from Gujarat points out that ‘prices of goods were down only in the first six months, and now they are higher by 5% on average following multiple hikes by companies.

Furthermore, numbers of distributors claimed that instead of lowering the prices of goods, some consumer goods makers increased the grammage. The market leaders of Hindustan Unilever Ltd. and Nestle India Ltd. face anti-profiteering penalty for not lowering prices. While The Hindustan Unilever Limited got a stay order from the Delhi High Court and voluntarily deposited ₹ 90 crores, Nestle said it provisionally deposited the amount that it had set aside.

According to a distributor in Punjab, some consumers upgraded to premium products. If a person typically purchased four bars of soap, his consumption will not go up, adding that the reduced rate made him purchase a more premium brand. But he agreed with his counterparts in other regions that there hasn’t been an overall uptick in consumption because of GST.

A Nagpur retailer told that there are circumstances of customers buying competitively high-price items after GST rate reduction. But on the contrary, fast-moving consumer goods producers have also been pushing premium products in smaller packs.

Mr. Duggal from Dabur Ltd. agreed that there was a higher requirement for smaller packs, pointing the example of shampoo sachets selling at ₹ 1 each. “It is deeper penetration and a higher level of consumption, but I don’t see any premiumization in this.”

According to Mr. Duggal, “instead, there is a shift from products like tea and biscuits sold loose to packed, branded items. Smaller packs account for 20% to 30% of consumption, and in some categories, lower GST rates have made that formalization really possible. Even in the larger packs, noticeable discounting after GST rate cuts has enhanced offtake. “In oral, skin and hair care, it has brought a positive impact.”

Mr. Suresh Narayanan, the Chairman and Managing Director of Nestle India Ltd., also doesn’t see and support premiumization, because it’s more a brand strategy. But he has a more subtle perspective on volume growth—“it can be attributed to a mix of everything”. According to him, “The overall sectorial growth of FMCG has been fairly encouraging”. “The momentum in the market was good in 2018. Not that GST alone pushed it, but definitely it aided that”.