Income under the head Salary

Calculation of income under the head salary

The provisions pertaining to Income under the head “Salaries” are contained in sections 15, 16 and 17.

Normally speaking, salary arrears must be charged on due basis.

a) Salary income is chargeable to tax on “due basis” or “receipt basis” whichever is earlier.

b) Existence of relationship of employer and employee is must between the payer and payee to tax the income under this head.

c) Income from salary taxable during the year shall consists of following:

i. Salary due from employer (including former employer) to taxpayer during the previous year, whether paid or not;

ii. Salary paid by employer (including former employer) to taxpayer during the previous year before it became due;

iii. Arrear of salary paid by the employer (including former employer) to taxpayer during the previous year, if not charged to tax in any earlier year;

Salary, perquisite and profits in lieu of salary (Section 17)

The meaning of the term ‘salary’ for purposes of income tax is much wider than what is normally understood. The term ‘salary’ for the purposes of Income-tax Act, 1961 will include both monetary payments (e.g. basic salary, bonus, commission, allowances etc.) as well as non-monetary facilities (e.g. housing accommodation, medical facility, interest free loans etc.).

Section 17(1) defined the term “Salary”. It is an inclusive definition and includes monetary as well as non-monetary items.

‘Salary’ under section 17(1), includes the following:

The deduction available is the least of the following amounts:

For detailed discussion and calculation of HRA exempted, Click Here

-Rs. 100 per month per child upto a maximum of two children.

-Rs. 300 per month per child upto a maximum of two children.

City Compensatory Allowance is normally intended to compensate the employees for the higher cost of living in cities. It is taxable irrespective of the fact whether it is given as compensation for performing his duties in a particular place or under special circumstances.

This allowance is given to employees to meet the expenses towards hospitality in receiving customers etc. The Act gives a deduction towards entertainment allowance only to a Government employee.

Allowances which are fully exempt

Allowances or perquisites paid or allowed as such outside India by the Government to a citizen of India for services rendered outside India are exempt from tax. Students may remember that in such cases under section 9(1)(iii), the income chargeable under the head ‘Salaries’ is deemed to accrue in India. The residential status of the recipient will, however, not affect this exemption.

Any allowance paid to a Judge of a High Court under section 22A(2) of the High Court Judges (Conditions of Service) Act, 1954 is not taxable.

Allowance paid by the UNO to its employees is not taxable by virtue of section 2 of the United Nations (Privileges and Immunities) Act, 1947.

(5) Compensatory allowance received by a judge

Compensatory allowance received by judge under Article 222(2) of the Constitution is not taxable since it is neither salary not perquisite—Bishamber Dayalv. CIT [1976] 103 ITR 813 (MP).

As per the definition, ‘annuity’ is treated as salary. Annuity is a sum payable in respect of a particular year. It is a yearly grant. If a person invests some money entitling him to series of equal annual sums, such annual sums are annuities in the hands of the investor.

Annuity received from a present employer is to be taxed as salary. It does not matter whether it is paid in pursuance of a contractual obligation or voluntarily.

Annuity received from a past employer is taxable as profit in lieu of salary.

Pension is of two types: commuted and uncommuted.

Exemption in respect of Commuted Pension

(a) Employees of the Central Government/local authorities/Statutory Corporation/ members of the Defence Services: Any commuted pension received is fully exempt from tax.

(b) Non-Government Employee: Any commuted pension received is exempt from tax in the following manner:

If the employee is in receipt of gratuity,

Exemption = 1/3rd of the amount of pension which he would have received had he commuted the whole of the pension.

If the employee does not receive any gratuity

Exemption = ½ of the amount of pension which he would have received had he commuted the whole of the pension.

Gratuity is a voluntary payment made by an employer in appreciation of services rendered by the employee. Now-a-days, gratuity has become a normal payment applicable to all employees. In fact, the Payment of Gratuity Act, 1972 is a statutory recognition of the concept of gratuity. Almost all employers enter into an agreement with employees to pay gratuity.

Exemption in respect of Gratuity 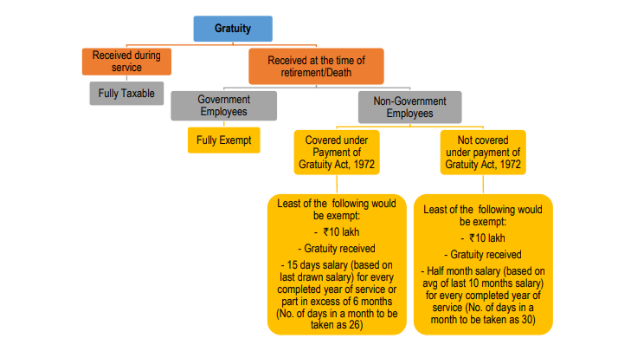 Fees, commission, perquisite or profits in lieu of or in addition to any salary or wages

Payment in the form of fees or commission by the employer to the employee are fully taxable. Commission may be paid as fixed percentage of turnover or net profits etc. Section 17(2) and 17(3) contains the provisions relating to perquisites and profits in lieu of salary, respectively.

Generally, employees are allowed leaves during the period of service. Employee may avail such leaves or in case the leaves are not availed, then the leaves may either be lapsed or accumulated for future or may be allowed to be encashed every year or at the time termination/retirement. The payment received on account of encashment of unavailed leave would be form part of salary.

Exemption in respect of leave encashment 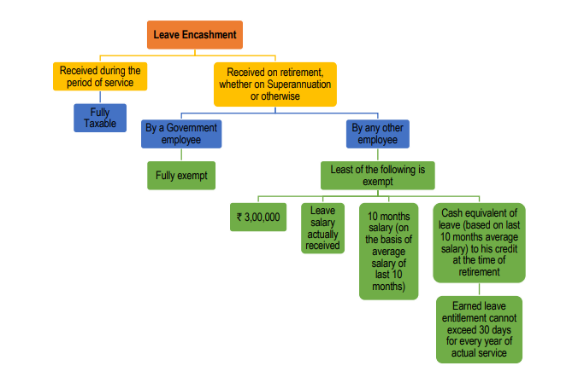 Contribution under pension scheme referred to in section 80CCD

Employer’s contribution to NPS account would form part of salary of employees.

However, while computing total income of the employee-assessee, a deduction under section 80CCD is allowed to the assessee in respect of the employer as well as employee contribution under a pension scheme referred therein.

Profits in lieu of salary

(i) Compensation on account of termination of his employment

The amount of any compensation due to or received by an assessee from his employer or former employer at or in connection with the termination of his employment.

The amount of any compensation due to or received by an assessee from his employer or former employer at or in connection with the modification of the terms and conditions of employment. Usually, such compensation is treated as a capital receipt. However, by virtue of this provision, the same is treated as a revenue receipt and is chargeable as salary

(iii) Payment from provident fund or other fund

Any sum received by an assessee under a Keyman Insurance policy including the sum allocated by way of bonus on such policy.

Any amount, whether in lumpsum or otherwise, due to the assessee or received by him, from any person –

(a) before joining employment with that person, or

(b) after cessation of his employment with that person.

Standard Deduction has been reintroduced in the 2018 budget. This deduction has replaced the conveyance allowance and medical allowance. The employee can now claim a flat Rs. 40,000 deduction from the total income, thereby reducing the tax outgo.

Entertainment allowance received is fully taxable and is first to be included in the salary and thereafter the following deduction is to be made:

However, deduction in respect of entertainment allowance is available in case of Government employees. The amount of deduction will be lower of:

Amount actually spent by the employee towards entertainment out of the entertainment allowance received by him is not a relevant consideration at all.

Professional tax or taxes on employment levied by a State under Article 276 of the Constitution is allowed as deduction only when it is actually paid by the employee during the previous year.

If professional tax is reimbursed or directly paid by the employer on behalf of the employee, the amount so paid is first included as salary income and then allowed as a deduction u/s 16.

(1) On account of arrears of salary or advance salary: Where by reason of any portion of an assessee’s salary being paid in arrears or in advance or by reason of his having received in any one financial year, salary for more than twelve months or a payment of profit in lieu of salary under section 17(3), his income is assessed at a rate higher than that at which it would otherwise have been assessed, the Assessing Officer shall, on an application made to him in this behalf, grant such relief as prescribed. The procedure for computing the relief is given in Rule 21A.

(2) On account of family pension: Similar tax relief is extended to assessees who receive arrears of family pension as defined in the Explanation to clause (iia) of section 57. “Family pension” means a regular monthly amount payable by the employer to a person belonging to the family of an employee in the event of his death.